I’m working on a story about rats. Back when B.F. Skinner was a BFD, I had a job working for the psych. department raising rats. Thatâ€™s where the action was then, animal studies. If we could just figure out rats, humans were right around the corner. I was an English major, but they couldnâ€™t get a psych major to take the job. They used to buy their rats from a laboratory supply company, but that runs into some money, and they were going through serious quantities of rats. You couldnâ€™t really reuse them. Once youâ€™d messed with them in one way, they were pretty much useless for another. Next stop: The Ft. Worth herpetarium. 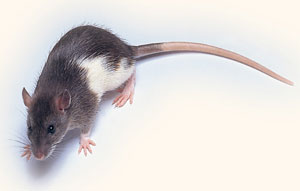 They were Long-Evans rats, the black and white kind. I was responsible for about 500 of them. There was a batch of gerbils, and one guy had a roomful of rabbits that were strictly off limits, but mostly it was all rats. My main job was producing more and more of them. This wasnâ€™t hard. The gestation period was 21 days, average litter size 7, weaned at 21 days. We gave the females another 21 days before breeding them again. I also issued experimental animals with all their records to the experimenters, mostly students doing the work for professors looking for publication, tenure, promotions. The grad students, like the rats in a maze were just trying to get out of there.