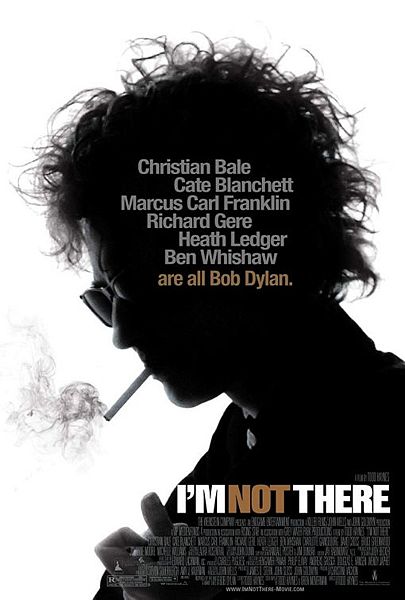 I wasn’t there. I wanted to be. I’m a devoted Dylan admirer. I even like some of the Christian stuff, if you can believe it. His recent memoir, Chronicles, Volume One, was one of the best memoirs I’ve ever read by anyone. The song and performance selection here is dead-on. All the actors’ performances are good. Cate Blanchett is way cool. Hell, I even got into Richard Gere looking for his dog in Riddle. I “got” it all. I know enough Dylan minutiae to write my own multi-actor exercise in the self-conscious, but it felt too much like Trivial Pursuit: The Dylan Edition. It’s the victim of its own conceit. By giving us a half-dozen distilled Dylans, the film oversimplifies him instead of portraying his complexity. What’s fascinating about Dylan, about any of us really, is that he is who he is, a single person who changes and evolves. I’d be curious what someone relatively unfamiliar with Dylan might make of this film. I would imagine it would be unbearable. It had its moments, many of them, just enough to keep me watching until the end, but though there was a powerful, moving story to be told, buried under the busyness, it was emotionally flat, quite unlike Dylan’s art. I fear more to come. All those guys who used to mine Dylan’s garbage are probably putting together a traveling exhibit. The film makes clear the media have always stupidly mythologized Dylan, then jumps down that same rabbit hole.