After several folks encouraged me to attend, I finally went to the International Conference on the Fantastic in the Arts in Orlando, Florida last week. It may be my favorite conference in the field. It’s at an airport hotel in the heart of the geography of nowhere with little to walk to except other soulless airport hotels featuring overpriced high fat dining, but the conference itself was a delight. It was easily the most convivial gathering I’ve been to, a blend of academics and writers who went out of their way to make newcomers feel welcome. I went with friend and fellow Richmond writer Tom De Haven, and he was equally delighted.

I read an abridged version of a story, “The Angel’s Touch,” which will appear in the April issue of Intergalactic Medicine Show and was pleased with its reception. I attended many fine readings (so many I’m sure I’m forgetting someone). Elizabeth Hand read from a YA novel in progress called “Wonderwall.” She captured the voice of a young runaway perfectly, and I can’t wait to read the finished work. Brian Aldiss read his version of “Metamorphosis” in which a hapless cockroach awakens to find itself transformed into “Franz sodding Kafka!” What a marvelous reader he is! It was one of the most hilarious readings I’ve ever heard. Patrick O’Leary read “The Little Guy,” an incisive skewering of everyone’s favorite president. Andy Duncan read a story in progress, the title of which includes the word “cache.” Sorry, Andy, my notes are illegible. The excerpt, however, was funny and sexy. Peter Straub read from intriguing novel-in-progress Skylark. It was my pleasure to read in the same session with Vernor Vinge. His story about an extremely dry martini of vast proportions was a real charmer, as the man is himself. Perhaps my favorite reading was James Morrow’s novella in progress, “Shambling Toward Hiroshima,” a secret history of a WW II WMD later generations have come to know as Godzilla. The brilliant director of Bride of Frankenstein, James Whale, is one of a delightful cast of characters. The best of the academic papers I heard was easily Sydney Duncan’s illuminating analysis of Kelly Link’s stories.

It was my great pleasure to meet Joe and Gay Haldeman and hang out with them. Joe is an endlessly fascinating conversationalist, and they were wonderful company. Tom and I also joined John Clute and Elizabeth Hand for a brief trip to the Canaveral wildlife area where we were thrilled with alligator sightings. John’s as pleasant as he is intelligentâ€”which is saying quite a lot. It was a special pleasure to get to know Liz whom I’d met years ago in Chicago. Tom and I both intend to return to the conference next year. It really lifted my spirits. 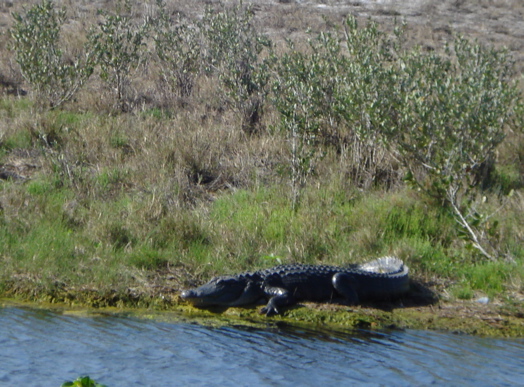