That’s the question in a survey much reported today. They didn’t ask me, but it’s made me think. My dad who was brought up in a Catholic orphanage/school spent summers with a foster parent who sampled the more out-there religions of her dayâ€”Jehovah’s Witnesses, Christian Science, Holy-Rollers, a sÃ©ance or two. He summed up his own religious beliefs to me one boozey evening as “a devout nothing.” Mom was what I call suburban protestant. She believed in God, prayed, liked Christmas, believed in Heaven but not in Hell, except maybe for Ronald Reagan after he took away my aunt’s disability benefits when he was governor of California. (My aunt had polio as a kid and was wheelchair bound most of her life).

So that’s the hand I was dealt, so to speak. I went to a Presbyterian kindergarten and 1st grade so I could start school with my peers, having missed the public school cutoff by one day. We learned catechism. We talked about sin and salvation. I hated it. My parents hated it. They were new to the south and hadn’t adjusted for the more conservative protestantism to be found there. I quit going to church when they quit going, when I was 9 or so. This was followed by a serious fit of pantheism in the woods near our house in Irving that resurfaces from time to time. Then I threw myself into investigating religions at the age of 13 or so. This culminated in my converting to Judaism (Reform) when I was 14. That was one seriously weird kid. Anyway, that endured into my undergrad days when the God idea began to grow a little thin for me, especially the Biblical one. I delved into existentialism (both Christian and atheist), an eastern sampler heavy on Taoism and Zen, and other stops along the groovy highway, though I was always suspicious of anything that went by an acronym, like TM. In middle age, I found a congenial wiccan group, but such groups are fragile. For a while, raising kids who wanted to go somewhere, I did a stint as a Unitarian. It’s a great place to meet liberals, but church is church.

All this time, I never had any trouble with the belief that life is meaningful and wonderful. I wasn’t seriously worried about suddenly committing evil deeds because I quit believing. So I dropped the God rope and feel much better ever since. The bastard’s got a helluva pull. So in answer to the question, I guess, like Dad, I’ve become a devout nothing. Like Mom, I like Christmas, don’t really like going to church, and don’t believe in Hell. I don’t pray like she did, don’t believe in God (though I do write about Him in stories I imagine she would like). For the most part, she’d approve of my religious practice. So I guess the answer would be no. I’m still practicing my parents’ religion.

“Realism is the art of being superficialâ€”seriously.” â€”James Branch Cabell

Which is not necessarily a bad thing. Balzac’s wonderful. I’ve been working on a story for Richmond Noir, a collection of mysteries set in Richmond by local writers. It’s been great fun, but it’s the first realistic thing I’ve done in agesâ€”set in a straightforward contemporary Richmond. It almost seems like cheating. I don’t have to think about the way the world works; I don’t have to invent it or make sure it’s consistent. It’s so easy. I may have to do more of this!

While hiking last weekend, Sarah and I spotted the mutant goose (center)â€”which could explain the prodigious amount of goose droppings in recent times. 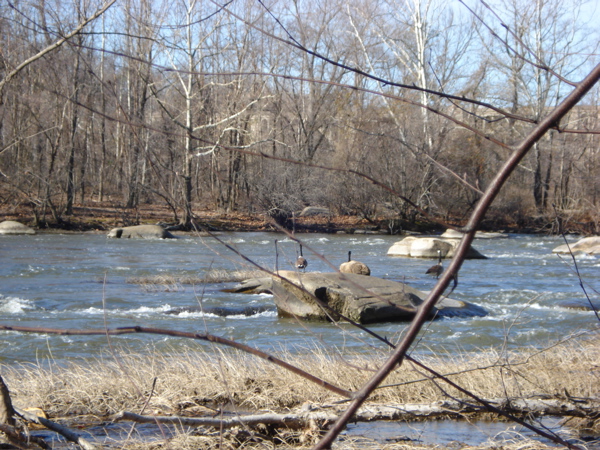 Actually, the goose moved, and that’s a log that looks like a giant asshole, but for a moment there, we thought we’d made a groundbreaking discovery of stupendous implications!

I just finished a marvelous book by Richard Preston, First Light: The Search for the Edge of the Universe. It was sent to me by an old friend from my college days in Arlington, Texas, Tim Shropshire, who resides in Boulder, Colorado these days. (Good move, Tim). I haven’t seen him in almost 30 years now, but the internet helped us find each other. The non-fiction book chronicles the work of a group of astronomers at the Hale Telescope. I found it did more than most sf novels to evoke a sense of wonder and an appreciation for the work of scientists. I highly recommend it. And though the photo is from the Hubble, here’s a galaxy to whet your appetite.

I haven’t been posting much because I’ve been closing in on the end of a draft of a novel-in-progress. Everything else pretty much has to get out of the way for the moment. I have been kicking around different titles, however, and thought I’d ask what appeals. The working title has been The Best Lucifer Ever. Also in contention are Lucifer in Dreams and Lucky to Have Lucifer. If any of these sounds more enticing to you, please pass that information along.