In the panhandle of Texas
you can forget FM.
The world is flat here.
People stick Cadillacs
in the sand as an art joke.

Two o’clock in the AM
signals bounce off the ozoneâ€”
Chicago,Â  Nashville,Â  Del Rio:
A blizzard buries
the Grand Ole Opry,
but Jesus rises,
Saving and Healing
for Postage and Handling.

Four.Â  An accordion plays
polka and static.
Stopped, the desert is as huge
as the hiss of my piss
on the ground.
Had a friend once
on speed who saw
a 40 foot cowboy
striding toward him
down the highway,
over his car
and into his
rearview mirror.

I caught these guys on PBS the other night.Â  One of the songs wouldn’t leave me alone, so I tracked it down.Â  Have a listen:Â  “I Still Think of You Sometimes”

One of the attractions of starting this blog is the opportunity to give stuff away. For several years now I’ve been working on a collection of short stories, in various states of completion, with God as a main character, sometimes as the protagonist, sometimes not, with the working title godstories. I’ve never much attempted to market them. God, according to my sources, generally approves of giving stuff away. This one, “Waiting For a Train,” serves as an introduction to the tales:

Waiting for a Train

God stands on a cracked concrete platform waiting for a train. A hundred yards behind him on the highway, cars whiz by in a great hurry in both directions. It’s August. Everybody’s on holiday. Except God.

Nothing moves on the rusty rails except the train, still several kilometers away, and a few kilometers beyond that, a cat who enjoys the smooth steel beneath his paws. God notes the railsâ€™ parallel linesâ€”the idea of them anywayâ€”converging in infinity, an image of eternity. Somewhere between here and eternity that same cat gets smacked by a train.

That’s the trouble with being God. The universe is lousy with images of eternity, littered with dead cats. He can’t let it bother him, though. Infinity is his stomping ground. The unknowable is a piece of cake. The unthinkable?â€”just something heâ€™s already thunk. He’s God.
END_OF_DOCUMENT_TOKEN_TO_BE_REPLACED

AgÃ©d P is Alice, our 14-year-old Lab mix. She’s named after the protagonist of Wilderness. I’ve raised her from a 5-week-old pup. Her mother was struck by a car in Oregon Hill (of Cowboy Junkies fame) days before I got her. The father, “a shepherd/collie mix,” who lived a leashless life, likely sired many, but none as smart or sweet-dispositioned as Alice, I’m sure. Her health and zest for life are intact as she approaches 100 in dog years, though arthritis has her moving more slowly and meditatively from one sniff to the next. I’ve tried to emulate some of the Tai Chi practitioners I’ve seen in the park so that I can elegantly match her glacial pace, but it doesn’t always work, and by the time we’re done, my back aches too. I figure she’s teaching me about growing old.Â  The world isÂ  a museum filled with rich experiences like the subtle layers of piss on monkey grass, but the museum floors seem to get harder every day.

In Germany, I was struck by how little space is wasted. I took this picture in Freiberg close to the train station. A drain under a bridge is fashioned as a whimsical sculpture. 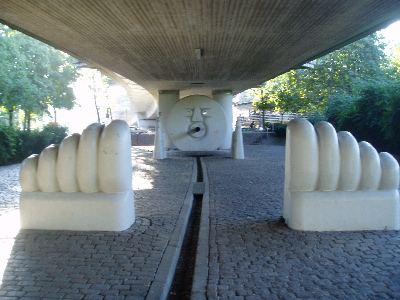 This is actually an infrequently asked question. What I’m usually asked is what my favorite is. That always feels like choosing among beloved childrenâ€”all of them are favorites when seen through one lens or anotherâ€”but I definitely have an unfavorite, Time and Time Again. It’s a reincarnation story, three interwoven narratives in the 18th, 19th, and 20th centuries. The male protagonist remembers his livesâ€”the only way reincarnation interests meâ€”and he changes over time. I wasn’t interested in doing a history-repeats-itself story. While I still like the 18th and 19th-century stories, the 20th-century one needs revision.
I changed editors in the middle of TATA. Ann Patty, my editor for Wilderness departed S & S. Perhaps I should have gone with her. Lisa Weinstein who did Ghost optioned the book for a film, and I noodled with a screenplay that would give me a chance to revise the narrative, but like most film projects, it was not to be, and I moved on to other things. The original title was Remember Me, but Mary Higgins Clark, also with S & S was publishing a novel by that title the same season. I’ve never liked Time and Time Again since it’s much too close to Jack Finney’s classic Time and Again.

THE POET TAKES ALL MORNING

The poet takes all morning to wake up sometimesâ€”
Sometimes daysâ€”sometimes weeks.
The poet eats too fast and asks for seconds.
The poet doesnâ€™t know what heâ€™s on about
But he knows thereâ€™s a word for it.

The poet doesnâ€™t care
If I make any money,
If I eat things that are bad for me.
The poet believes that anything
Worth doing badly is worth describing well.
The poet wishes we would move to Italy,
That Death was Beauty, and Beauty, Truth.

The poet wants to throw a party
And invite his dreams,
Then go home with someone else.
The poet believes in Blakesâ€™s God and Miltonâ€™s Satan
But canâ€™t sit still for the pew religionâ€”
He doesnâ€™t understand why the hymns have to be so bad,
Why the sermon is never interesting,
Why no one weeps at communion.
The poet falls in love with every woman he meets
And loses them because he falls in love with every woman he meets.
The poet lies awake all night
Watching the dying animal sleep.

Iâ€™m a novelist, I complain to himâ€”
I donâ€™t have time for these endless moments.
The poet says I need a break from the words marching all the way to the right margin and back again trying to make something happen, never just letting time stop to be here now.
Maybe, I say.

The poet takes all morning to wake up sometimes.
Sometimes he wakes up right away.
The poet laments there are more hours in the day
Than there are things to do them.
The poet rides in the backseat asking,
Are we there yet? Are we there yet?
And before you know it, of course we are.
â€”Dennis Danvers

The number one question I get is “Where do you get your ideas?” or “Where did you get the idea for [name of novel]?” I get ideas all the time, but most of them don’t stick around long enough to bother with. Those who loiter are put to work doing a character, a scene, a bit of dialogue. Those who won’t go away usually mate with some other loiterer and turn into a novel. Wilderness, my first published novel (about the fourth one I finished) was born out of my interest in medieval romance, particularly Marie de France’s sympathetic werewolf in Bisclavret, the old Lon Chaney Jr. movies, and wolves. The spark was a dinner discussion with housemate philosophers Lenore Langsdorf and Laurent Godbout among others about the nature of humans, whether we’re animals or something essentially different. I was in the animal camp, and I talked a lot about the werewolf. The next morning I started writing the novel. My goal was to have a real woman turn into a real wolf. Researching the novel I went to Algonquin Provincial Park in Ontario during black fly season. What does a Texas boy know about black flies? I had the place to myself and heard the wolves howling at night, but I never saw one, though I wrote the first draft of the wolf encounter scene in the park on site, swatting black flies the whole time.

After the bike wreck, Sarah and I did spend a week in Germany, a delightful place. Sarah, an urban planner, was particularly pleased to see this feline-friendly project in Frankfurt near a number of drinking establishments. 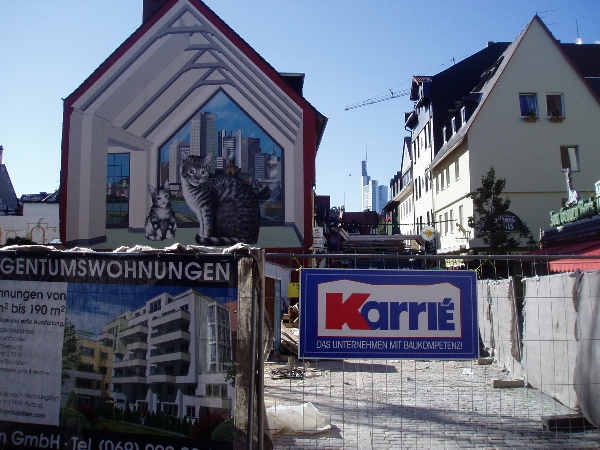 About the time this site was created by my good friend Steve Krause, summer school began, teaching beganâ€”nine novels and nine films in nine weeks. Then, the last day of the term, a little over a month ago, there was the bike wreck. A woman walking her dog on a retractable lead (evil, those) was sitting in her car making a phone call (evil those, as well) while her dog was taking a dump in the median. I love dogs. From my bike perspective, all I saw was dumping dog. I looked around for the attached person. She stepped out of her car and said, “Stop!” I yelled some other things when I picked myself up. I’m happy to report the dog was unharmed. Nobody, to my knowledge, ever picked up the poop. But my sprained thumb now works okay, and my back less so. Still, I hate to be late.