This Thursday October 24th at 6:30 p.m. at Fountain Books 1312 E. Cary in Richmond it will be my pleasure to join Ron Smith and Howard Owen in readings from Remapping Richmond’s Hallowed Ground, an outstanding collection of stories, poems, and art responding to the legacy of the Civil War in our fair city. Â To be clear, this ain’t your mama’s War Between the States. Â The event is free and open to the public. Â Hope to see you there.

I will be at Readercon, one of my favorite conventions, starting this Thursday. I’m looking forward to seeing old friends and discovering new writers. I read Thursday evening at nine from a forthcoming (July 31st) short story on tor.com, “All the Snake Handlers I Know Are Dead.” I’m also on a couple of panels, one about the wonderful fiction of Maureen McHugh, who is also the guest of honor; and another about the reexamination of the Civil War mythos, largely in the clutches of the Lost Cause folks since the war, in fantastic literature. I’ve done a bit of that. Most recently in “Christmas in Hollywood Cemetery” in the anthology Remapping Richmond’s Hallowed Ground. After Readercon I’m off to Norton Island off the coast of Maine for a couple of weeks of intensive writing. I have more publication news I can’t reveal yet. Â Life is very good indeed.

The Richmond Noir crew, myself included, will make an appearance at the James River Film Festival.Â  This should be great fun.Â  From their website:

This baroque noir protoype from B-director Edgar Ulmer was often overshadowed by bigger productions from MGM (Postman Always Rings Twice) and Paramount (Double Indemnity) released about the same time. But Detour accelerates the noir cycle to its bitter end and resembles (in structuring and characterizations) latter day noirs like Orson Wellesâ€™ Touch of Evil (â€™58) and Robert Aldrichâ€™s Kiss Me Deadly (â€™55), with an over-the-top Ann Savage as the femmes noire from Hell, and Tom Neal as the romantic, ill-fated pianist who picks her up hitchhiking. All the noir conventions are intact: Fate, confessional voice-over, a love triangle, flashback and a Los Angeles end-game setting.Â  Ann Savage makes Barbara Stanwyckâ€™s Phyllis Dietrichson in Double Indemnity look like a school marm! Editors Andrew Blossom and Brian Castleberry, writer Dennis Danvers, and writer/editor Tom De Haven will be on hand to read from and sign copies of Richmond Noir, on sale before and after Detour, courtesy of Chop Suey Books.

From the Gallery 5 website:Â  This will be the spookiest reading of the season! Authors from the notorious Richmond Noir will team up with Beth Brown, author of Wicked Richmond, to bring you a delightfully eerie evening of true and fictional stories of the underbelly of Richmond! Keep in mind, this reading will happen at Gallery 5, once the location of Richmond’s gallows. Chilling!

If you haven’t already heard about Richmond Noir, check out their publisher’s page: http://www.akashicbooks.com/richmondnoir.htm

Wicked Richmond, which comes out later this month, is a great book of true stories of Richmond’s darker side. Whether it is tales of Civil War espionage, Spanish pirates captured off the Virginia coast and brought to justice in Richmond, rumrunners peddling illegal liquor during Prohibition, or the misadventures of upper-crust colonial families, Wicked Richmond captures the debauchery that runs through the city’s historic past. Check it out here:
http://wickedrichmondva.com/

Tom De Haven, Andrew Blossom, and I will be doing the honors for Richmond Noir.Â  Hope to see you there. 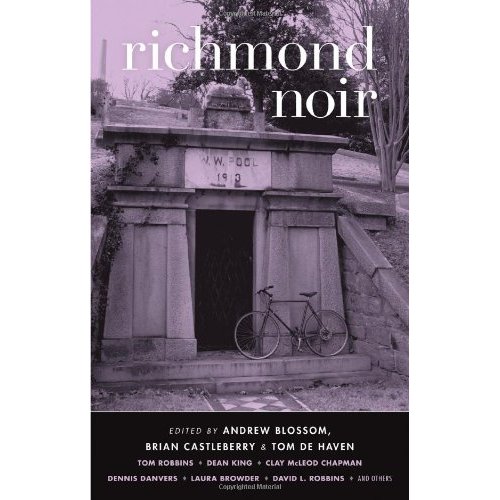 Tomorrow at noon I hope to see everyone brave the cold for the first Richmond Noir event at the Library of Virginia, 800 E. Broad Street.Â  There’s parking, or if you don’t want to drive, tons of buses stop right out front.Â  I’ll be reading with Meagan Saunders, Laura Browder, and Dean King.Â  Trust me, folks, this will be a varied and interesting reading.Â  Editors Tom De Haven, Andrew Blossom, and Brian Castleberry will also be on hand to answer your many noir questions.Â  See you there!